The Wiesn outside the beer tents is quite a spectacle. Curiosity led me to take a stroll (sober) around it on one of Oktoberfest’s traditionally busiest days (the second Saturday) to get a better big-picture view of the event. Drizzle dampened the day, but certainly not the fest-goers spirits. By the time I had arrived, around 1pm, the drunken revelry was ripe.

I think when King Ludwig I first declared Oktoberfest, he had no idea what it would become. While it began as a party to  celebrate his marriage to Princess Therese and thereafter evolved into an annual fest around a horse race, the end of the race tradition in 1960 catapulted the event into the display of commercialism and debauchery it is today.

Oktoberfest circa 1900 looked quite innocent.

Oktoberfest now is really just a huge carnival that can easily overload your senses. It’s not only its highly alcoholic beer that can make you dizzy, but so could its flashy carnival rides with names such as Top Spin, Techno Power, and Flip Fly. Blaring music accompanies and keeps tempo with each ride; e.g., “Will you be my girl” was the tune for an older, more traditional ride involving swinging pirate ships, while techno music powered the nerves of those on the wilder rides. 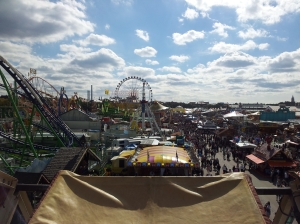 A birds-eye view of Oktoberfest now. Image by Mummelgrummel

People’s intoxicated reflexes and aim are tested at carnival games–most of which seemed to be some form of “shoot the [insert object].” Vendors try to lure your gaze with ueber-kitsch–from Lebkuchenherzen (inedible, but colorfully decorated heart-shaped cookies) to Bierkruege (inaccurately called Biersteins by Americans), stuffed Bavarian cows to “I survived Oktoberfest” t-shirts–which I imagine seem more enticing the drunker you are. And the smells of roasted nuts and sausage hang in the air, teasing you into a case of the munchies, whether drunk or sober (the smells coaxed me into buying a chocolate-covered banana, which was unfortunately not as tasty as I’d hoped).

Lebkuchenherzen. But don’t eat them. Image by Rado Bahna

Then there are the random, ad-hoc “side shows” that naturally occur in a crowd of drunk people. I watched one man try to unsuccessfully lug his incredibly intoxicated and rather rotund friend, who was slumped in a stupor on the ground, to his feet. An ambulance parted the crowd, and one jovial chap tried to impress his friends by hitching a ride on the back of it. A constant crowd hovers around a ride that entails burly men pulling fest-goers up a conveyer belt, so they can ride a mat down a large slide. The audience is most amused by the cocky male fest-goers who don’t think they need any help getting on the conveyer belt–more often than not, they really did need the help.

Needless to say, after about 45 minutes, my senses were sufficiently over-loaded and I needed to abandon the Wiesn quickly. Once again, the warnings were right–it’s really only fun if you’re drunk (or under the age of 12 and too captivated by the shininess of your surroundings to care).

In the next, and last, episode of Survivor: Oktoberfest, I describe the experience of the beer tents.